Home > Get Creative > Going Green with Your Old Books and Magazines

Going Green with Your Old Books and Magazines 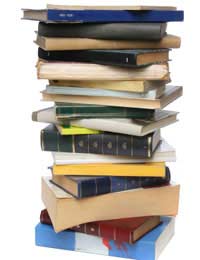 Also, have a look if your favourite newspaper or magazine is available to read online. Many are nowadays.

If you’re having a clear out of old books, there’s loads of ways you can re-use them without sending them to the landfill just yet.

Firstly it’s worth asking your local library or a school if they’re interested in any of the books. Often public and school libraries are grateful for any donations.

You can also use your unwanted books to make some extra money. Second-hand book shops will often buy selected books from you. They will either offer you cash, or an exchange for other books in their shop. Alternatively there is a strong market for selling second-hand books online. If they are rare books you can get quite a lot of money sometimes. For paperback novels and the like you’ll get a lot less money that you paid for the book usually, but it’s still more than you’d get for putting the books in the bin.

Sometimes libraries will be interested in receiving old magazines, so it’s worth asking about that if you’re taking your books in anyway. Alternatively, you could ask at local hairdressers, doctor’s surgeries and hospitals as these places often put magazines in the reception areas for people to flick through while they wait.

Magazines (and some books) can also be cut up and used for craft purposes. Pictures and words cut from magazines can make quirky greetings cards or home-made gift wrap. You can also use images from magazines to decoupage items such as tables and boxes or crockery. Decoupage is when you stick items, such as magazine cuttings, onto something and seal each layer with varnish. The varnish means that the decoration doesn’t look stuck on but almost as if it is painted or printed on.

You could use cut up magazines to make envelopes and collages too.

If you were thinking of sending some books or magazines to recycling, think about if they have really been re-used as much as possible first. It’s likely there’s something you can do with them that will allow someone else to enjoy them as much as you did.

How to Knit With Plastic Bags

How to Make a Bag from an Old Book