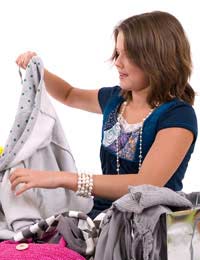 Do you feel that your wardrobe is a bit stale? Have you got loads of clothes you want to get rid of? Instead of spending loads of money on new clothes and chucking all your old ones out, why not hold a clothes swapping party?

Why Swap Instead of Shop?

You can’t really lose by having or attending a clothes swapping party - you could get rid of some old clothes that are cluttering up your house and get a new outfit for free. You’ll also have the satisfaction of knowing that you are ‘shopping’ in an ethical way.Cutting down on cheap throwaway fashion is a concern for many who do not want to contribute to the 900,000 tonnes of shoes and clothes that are thrown away in the UK every year.

As well as having a feel good factor financially and environmentally, clothes swapping parties are a fun event in themselves. You get to try out new outfits and see someone else make something new of your old clothes too.

You can have a clothes swapping party at your house, invite your friends, put on some snacks and drinks and make a night of it if you like. Alternatively many people organise clothes swapping parties in pubs, bars and other venues these days. You can charge a small entry fee to cover the room hire.

Got all that? Now all that’s left to do is swap until you drop!

Great Tip for Reducing and Reusing Things at Christmas Time