Home > Food & Garden > How to Use Composting Worms

How to Use Composting Worms 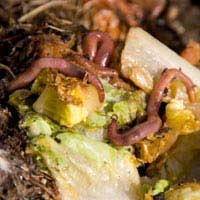 Did you know that the majority of organic waste can be recycled by worms?You can create your own worm composting system which will be able to change up to 70% of your household waste into compost which will benefit your garden and lawn.

How to make a worm composting bin

Step one: First you need to drill a holes in the bottom and top of the bin.

Step three: Next, add some of the bedding material (Newspaper or straw).

Step four: Put the worms in a space in the bedding material and add some more bedding on top.

You can keep the worm composting bin outside but if the temperature drops below 40ºFahrenheit, you’ll need to bring the bin inside. You can keep it in a shed or garage, for example.

Worms can eat foods such as:

They can’t eat foods such as:

You need to distribute the food within the worm bedding. Feed the worms gradually at first. Don’t add more food waste until the previous food has almost all gone. You may need to experiment with the number of worms if you are generating a lot of food waste.

As the bin generates new worms, you’ll be able to add more food.

Here are some common problems experienced by worm composters and how to avoid or rectify them.

Fruit flies aren’t dangerous but they are a nuisance. This problem is mainly caused by the food being exposed. Make sure that when you add food, you bury it well in the bedding.

If the worms are dying, check that the bedding is not too wet or dry. Also, make sure that there is enough bedding. If there is no bedding, you need to harvest the compost and add fresh bedding.

Tasty Ways to Use Up Leftover Rice

Using Up Leftover Liquids in the Kitchen