Home > Shops & Shopping > What You Can Do With Old Electrical Goods

What You Can Do With Old Electrical Goods 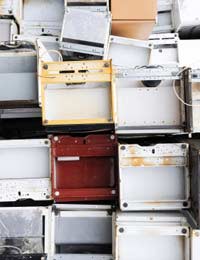 The idea of so much electrical waste is sobering, but by re-using and recycling electrical goods where possible, we can reduce this figure significantly.

The problem with Electrical Waste

If electrical waste is not recycled or re-used it is either disposed of by being sent to landfill or being incinerated.

Fridges and freezers can be especially harmful. 3 million fridges and freezers are estimated to be thrown away annually in the UK. Both give out harmful gases which are believed to harm the ozone layer and contribute to climate change.

Many organisations now request and collect electrical items from UK households. Even if the items no longer work they will often still be welcome as staff are trained to refurbish and mend items. The recycled electrical items are then usually used to pass onto those on low incomes or to rehousing schemes.

These electrical waste and furniture recycling schemes are often community projects and also create jobs for local people and provide skills and training to volunteers.

Local Authorities will have information on these schemes,

If an items isn’t suitable for re-use, it can usually be recycled and dismantled so that all the useful parts and materials are extracted.

Even when electrical items have to be incinerated (after everything that can be removed has been) it is still possible to then extract some important metals at this stage, A chemical process is used to extract other metals such as gold and silver.

What To Do if You Have Electrical Waste to Dispose Of

If you haven’t been able to re-use your waste electrical items in any suitable way, it’s important that you make sure the items are collected and disposed of correctly. Your Local Authority may be able to arrange for the items to be collected and they should be the first port of call.

They will either send someone to collect the electrical goods, or direct enquirers onto another relevant organisation, or suggest a drop off point. If they collect the goods, there may be a small charge.

Interview With a Charity Shop Worker

How to Avoid Excess Packaging

A Guide to Buying Recycled Goods

All about Give Away Shops
Share Your Story, Join the Discussion or Seek Advice..
@Gwen. A charity would be the best place to ask. Many of them will come and take things away especially if they might be used for the good of someone else. Try calling the numbers of your local charity shops. The Salvation Army might also be able to help. If you're willing to pay, your local paper might have some adverts for "a man with a van" too.
GreenUsesForWaste - 13-Feb-15 @ 12:49 PM
We are pensioners and are not able to lift things into and out of a car, so I wondered if there was a way a working old television and other electrical goods could be collected
gwen - 11-Feb-15 @ 9:44 AM
Title:
(never shown)
Firstname:
(never shown)
Surname:
(never shown)
Email:
(never shown)
Nickname:
(shown)
Comment:
Validate: